Home » Blog » What is Container Orchestration?

What is Container Orchestration?

Container orchestration helps IT professionals and programmers maximize their applications’ performance. It helps them ensure that multiple containers can work together to handle more tasks at the same time than any one container could manage on its own. But how does container orchestration work, exactly? What are its advantages, and how do you go about implementing it? This article will provide answers to all of your queries and more.

What is Container Orchestration?

Container orchestration automates the scheduling, deployment, networking, scaling, health monitoring, and management of containers. Containers are complete applications; each one packaging the necessary application code, libraries, dependencies, and system tools to run on a variety of platforms and infrastructure. Containers in some form have been around since the late 1970s, but the tools used to create, manage, and secure them have dramatically changed.

We have come a long way from the days of building single-tier monolithic applications that only worked on a single platform. Today, developers have choices between microservices, containers, and virtual machines, all with options for different cloud providers or hybrid deployments including on-premises. 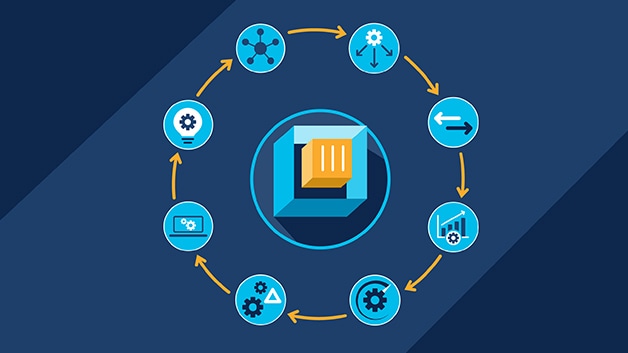 How does Container Orchestration work?

When deploying a new container, the container management tool automatically schedules the deployment to a cluster and finds the right host, taking into account any defined requirements or restrictions. The orchestration tool then manages the container’s lifecycle based on the specifications that were determined in the compose file.

You can use Kubernetes patterns to manage the configuration, lifecycle, and scale of container-based applications and services. These repeatable patterns are the tools needed by a Kubernetes developer to build complete systems.

Container orchestration can be used in any environment that runs containers, including on-premise servers and public cloud or private cloud environments.

What are the benefits?

It’s probably clear that the chief benefit of container orchestration is automation – and not only because it reduces greatly the effort and complexity of managing a large containerized application estate. By automating operations, orchestration supports an agile or DevOps approach that allows teams to develop and deploy in rapid, iterative cycles and release new features and capabilities faster.

In addition, an orchestration tool’s intelligence can enhance or extend many of the inherent benefits of containerization. For example, automated host selection and resource allocation, based on declarative configuration, maximizes efficient use of computing resources; automated health monitoring and relocation of containers maximize availability.

Why do we need it?

When you have a limited number of containers, it is possible to perform those management tasks manually or with simple scripting. However, as the number of containers increases, it becomes harder and harder to do so. This is where container orchestration tools will come into play.

You can use other tools such as Kafka to let the containers communicate with each other. You can find out more about using Docker, Kubernetes, and Kafka with MongoDB in this blog post.

There are many orchestration tools available for containers; some of the most common are described here.

Container orchestrators have become an industry standard. They help automate container deployment, installation, provisioning, and management. Although container orchestration poses some security risks, the proper safeguards can allow organizations to reap the benefits of containerization, and save time while ensuring consistency and scaling automatically.