Home » Blog » OSI Model: What is it? And 7 network layers explained

Networking is a vast topic. The OSI model helps us better understand it. In this article, we will cover the OSI model. The Open Systems Interconnection (OSI) model is a conceptual framework that describes the functions of a networking or telecommunication system in seven layers. The OSI model describes how a network functions and standardizes the way that systems send information to one another.

What is OSI Model?

OSI (Open Systems Interconnection) is a reference model for how applications communicate over a network. This model focuses on providing a visual design of how each communications layer is built on top of the other, starting with the physical cabling, all the way to the application that’s trying to communicate with other devices on a network.

A reference model is a conceptual framework for understanding relationships. The purpose of the OSI reference model is to guide technology vendors and developers so the digital communications products and software programs they create can interoperate and to promote a clear framework that describes the functions of a networking or telecommunications system that’s in use.

Most vendors involved in telecommunications try to describe their products and services about the OSI model. This helps them differentiate among the various transport protocols, addressing schemes, and communications packaging methods. And, although it’s useful for guiding discussion and evaluation, the OSI model is theoretical and should be used only as a general guide. That’s because few network products or standard tools keep related functions together in well-defined layers, as is the case in the OSI model. The Transmission Control Protocol/Internet Protocol (TCP/IP) suite, for example, is the most widely used network protocol, but even it doesn’t map cleanly to the OSI model. Why does the OSI model matter?

Although the modern Internet doesn’t strictly follow the OSI Model (it more closely follows the simpler Internet protocol suite), the OSI Model is still very useful for troubleshooting network problems. Whether it’s one person who can’t get their laptop on the Internet, or a website being down for thousands of users, the OSI Model can help to break down the problem and isolate the source of the trouble. If the problem can be narrowed down to one specific layer of the model, a lot of unnecessary work can be avoided.

The 7 Layers of the OSI Model

OSI is broken down into layers. Each layer has a specific function and communicates and works with the layer below and above it. The OSI Model is conceptual, but its design enables both physical and virtual communication across a network. We’ll start with layer 7, which is the uppermost layer on the stack.

Layer 6 of the OSI Model: The presentation layer

Also, it synchronizes the data transfer. If a large amount of data is being sent, the session layer can set up checkpoints. If the transmission gets interrupted before all the data is downloaded, the checkpoints allow the transmission to be resumed without it starting all over again. 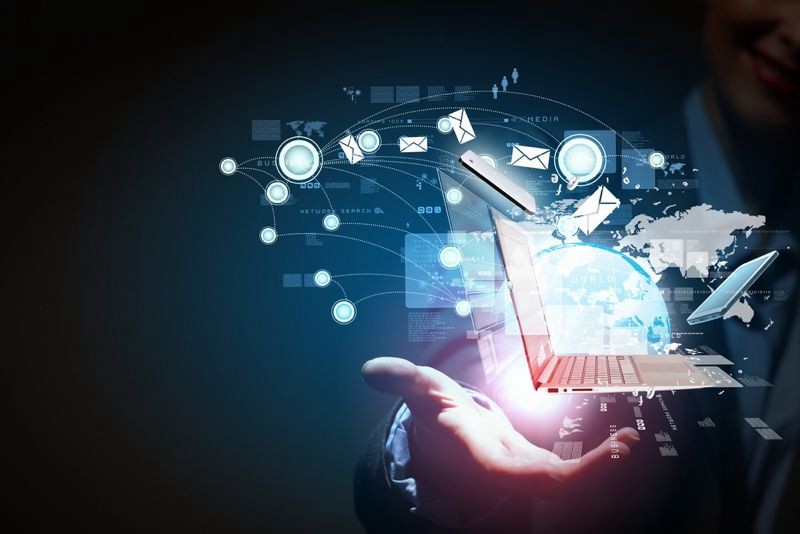 Layer 4 of the OSI Model: The transport layer

The transport layer takes data transferred in the session layer and breaks it into “segments” on the transmitting end. It is responsible for reassembling the segments on the receiving end, turning them back into data that can be used by the session layer. The transport layer carries out flow control, sending data at a rate that matches the connection speed of the receiving device, and error control, checking if data was received incorrectly and if not, request it again.

The network layer is responsible for facilitating data transfer between two different networks. If the two devices communicating are on the same network, then the network layer is unnecessary. The network layer breaks up segments from the transport layer into smaller units, called packets, on the sender’s device, and reassembles these packets on the receiving device. The network layer also finds the best physical path for the data to reach its destination; this is known as routing.

Layer 2 of the OSI Model: The data link layer

The data link layer establishes and terminates a connection between two physically-connected nodes on a network. It breaks up packets into frames and sends them from source to destination. This layer is composed of two parts – Logical Link Control (LLC), which identifies network protocols, performs error checking, and synchronizes frames, and Media Access Control (MAC) which uses MAC addresses to connect devices and define permissions to transmit and receive data.

How data flow through the OSI model

Data flow from layer 7 down to layer 1 from the sender and then flows from layer 1 to layer 7 on the recipient device. The simplest example of communication flow through the OSI Model is an email application.

The message is sent to the transport layer where data is segmented, and then the network layer breaks the segments into packets. Then, the packets are sent from the network layer to the data link layer, where packets are further broken down into frames. The frames are sent to the physical layer where data is converted to bitstreams of ones and zeros and transferred across a medium such as wireless connections or cables.

The most identified benefit of the OSI model is that it organizes thinking about networks and gives novices, journeymen, and masters a common, computer networking language. Human communication, discussions, and collaboration can use this language to remove ambiguity and clarify intent.