NodeJS vs PHP in 2022: Choose one for your project

NodeJS vs PHP – talking about the server-side programming languages, both are tough competitors. Both languages have been popular due to their high performance, compatibility, and security. There is no doubt why these two languages are highly recommended for server-side development.

Node.JS is a cross-platform, runtime environment that executes JavaScript code outside a web browser. Ryan Dahl created it in 2009 and it is used for building fast and scalable applications. It uses an event-driven, non-blocking I/O model.

It’s climbing the popularity ladder among developers pretty fast and some notable companies have already leveraged the power of NodeJS.

Hypertext Preprocessor or popularly known as PHP is an open-source server-side scripting language. It was developed in 1994, one and a half-decade before by Rasmus Lerdorf. Since then, it has been a huge success.

A survey by W3Tech revealed that almost 79%  of the websites in their data are made using PHP. Further, the ever-increasing popularity of content management systems like WordPress, Drupal, WooCommerce, and Shopify portrays how PHP has covered the backend under its wings.

NodeJS vs PHP in Coding

This aspect is contingent on the syntax that either language allows you to write fewer code lines or does not. The simpler and better engineered is the syntax of a language, the less code you will have to write to execute the program.

NodeJS requires way more code lines to execute the same functionality as PHP. Although you will be operating in a single development environment with JavaScript, which simplifies the learning curve, NodeJS apps are written with more code. PHP, on the other hand, operates with fewer lines but requires you to learn the LAMP stack to write apps. In PHP vs NodeJS coding, PHP is a clear winner.

This metric refers to the execution speed inherent to both technologies. High speed of execution means a quicker development process and more cost-effective projects.

NodeJS is among very few asynchronous development environments. This, being a major differentiator, gives NodeJS an edge over other languages. Being asynchronous means that it does need not wait for a module to be successfully executed before loading the next one. Such execution drastically reduces the downtime for the web app and makes for a seamless user experience.

Like most languages and technologies from the pre-2K era, PHP operates on synchronicity. That means every module and function is executed in the code-specified order. If one function or module is not executed, the consequential ones will not start until it’s completed.

Performance is one of the most significant metrics in-app evaluation as it impacts the user experience. It addresses the way the code was written using NodeJS and PHP, as well as performance KPIs including page load and UX/UI design.

As we have mentioned before, NodeJS operates asynchronously as well as utilizes the Chrome V8 engine, which accelerates the execution and drastically improves performance. JavaScript is also event-driven, which does not freeze new requests until the old ones are finished. Paired up with Node’s concurrency, JS creates a great environment to create well-functioning applications with incredible performance levels.

PHP is an older technology that does not provide concurrency and blocks new requests until it finishes existing ones. This feature slows down the entire system and negatively impacts the user experience. However, PHP can be used with HHVM which will boost your performance, yet remain slightly inferior to Node: in NodeJS vs PHP performance, Node still wins. 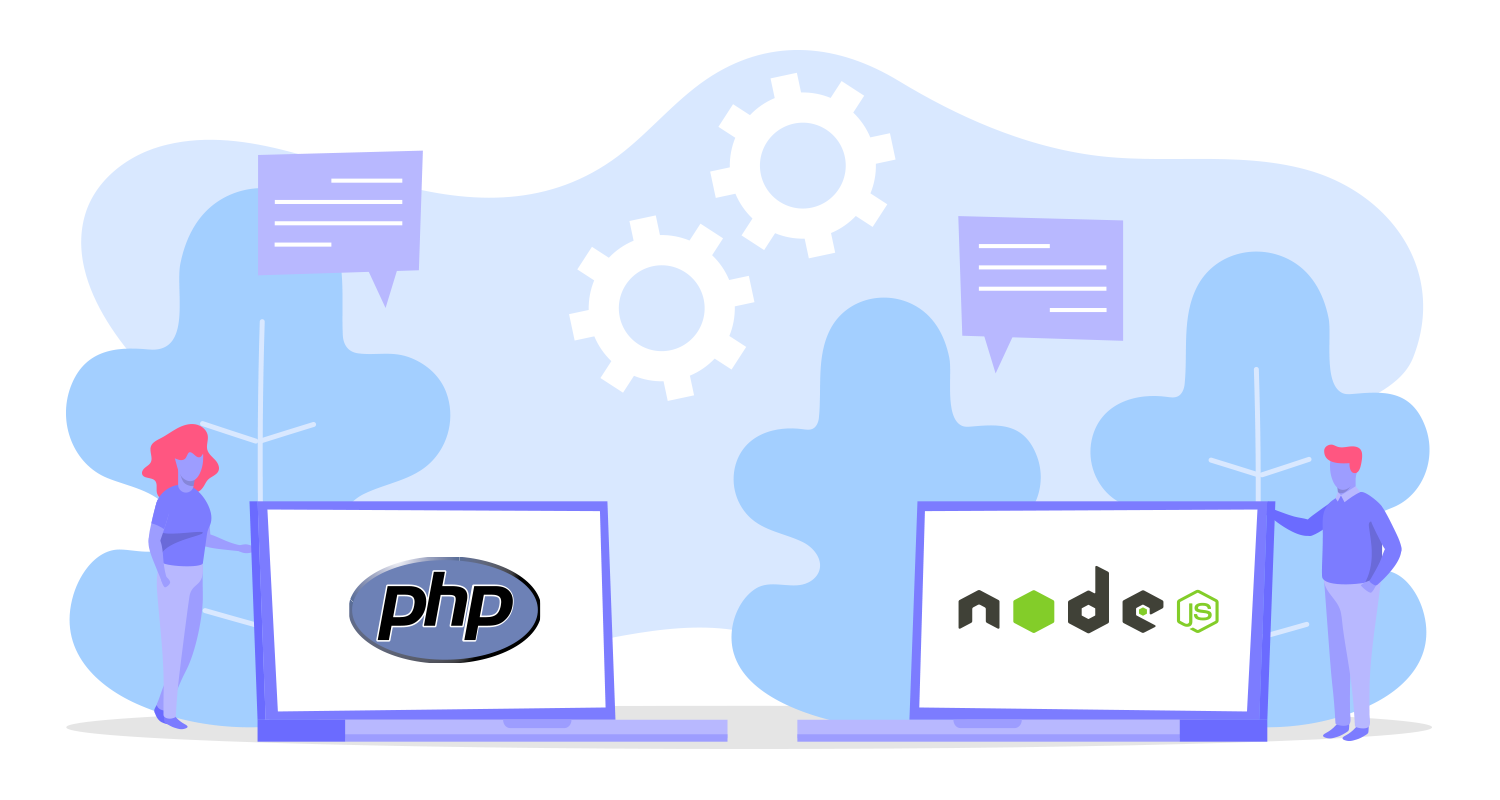 Here, we’re examining how conveniently the technology can connect with the database along with the type of the database – relational or traditional. Conventional databases traditionally store data in a navigational or hierarchical format.

Relational databases store data in the form of tables; that way, it’s super convenient to understand the relationships and dependencies between different data points.

There’s also the remarkable development of NoSQL (Not Only SQL) databases that allow data storage in formats like documents, key-pairs, and even graphs.

Since NodeJS has grown with the advent of NoSQL databases, it’s well-synchronized with all forms of databases. With Javascript Object Notation- a unique format of data used while interacting with databases- NodeJS can work swimmingly with NoSQL databases like MongoDB and CouchDB. It also supports graph databases and has substantial libraries to access SQL databases.

Being the older technology, PHP is designed to work with relational and conventional databases like MySQL and MariaDB. While it’s possible to import libraries to work with NoSQL databases, the process is tedious and eats up a large chunk of processing time.

NodeJS vs PHP in Community

Another crucial aspect of any technology including NodeJS or PHP is the community behind it. The community contributes to libraries and frameworks to keep the technology relevant and give it a competitive edge. Besides, a loyal community creates discussions on GitHub and other tech portals to answer questions and resolve difficult cases. Finally, communities are shaped by your potential employers, and when they are big and ambitious, your project will be sure to win.

Considering that PHP has been around since 1994 and has proven to be a reliable and successful technology, it has a much larger community. Thanks to WordPress, which supports millions of websites and uses PHP for its backend, the technology has become insanely popular. In PHP vs NodeJS, PHP is the clear winner with 26% on Statista. NodeJS is a relatively new technology that was launched in 2009. Even though Node is a very popular backend tool that has been gaining more and more traction, the community is smaller. At the same time, Node’s projects are newer and more relevant to current developers. Still, in the PHP vs NodeJS community comparison, PHP is the leader.

NodeJS has a range of alternatives that help it perform competitively. Joyent, the company that maintains, provides a SmartOS system. This is great for debugging, performance enhancement, and ease of deployment. With Heroku and NodeJitsu, it is easy to use NodeJS in a Platform-as-a-Service setup.

PHP is, directly and indirectly, powering almost 79% of the internet. Due to its majestic reach, it’s designed for compatibility with all major hosting service providers. With its LAMP stack, it meets the needs of many servers. However, LAMP isn’t considered the most secure technology stack for hosting.

To summarize, PHP has wider compatibility with hosting service providers. However, if security is not a major concern, you could freely choose either platform for your web-app development project.

The NodeJS ecosystem has a wide range of libraries and frameworks, but they lag way behind PHP’s numbers. Although Nodejs lacks in quantity, it makes up for its variety of projects.

Since it’s used for both server-side and backend programming, the types of projects available range freely fitting into a larger number of use cases.

WordPress has been a major contribution to the PHP ecosystem. The company is directly responsible for running a large percentage of total websites on the internet, and nothing else shows PHP’s godlike reach quite like this.

Moreover, the PHP community has developed a ton of training material and supporting technology over the years to bring new developers on board.

Note that PHP has a larger ecosystem while Nodejs has a richer one with a greater variety for projects, frameworks, and modules. 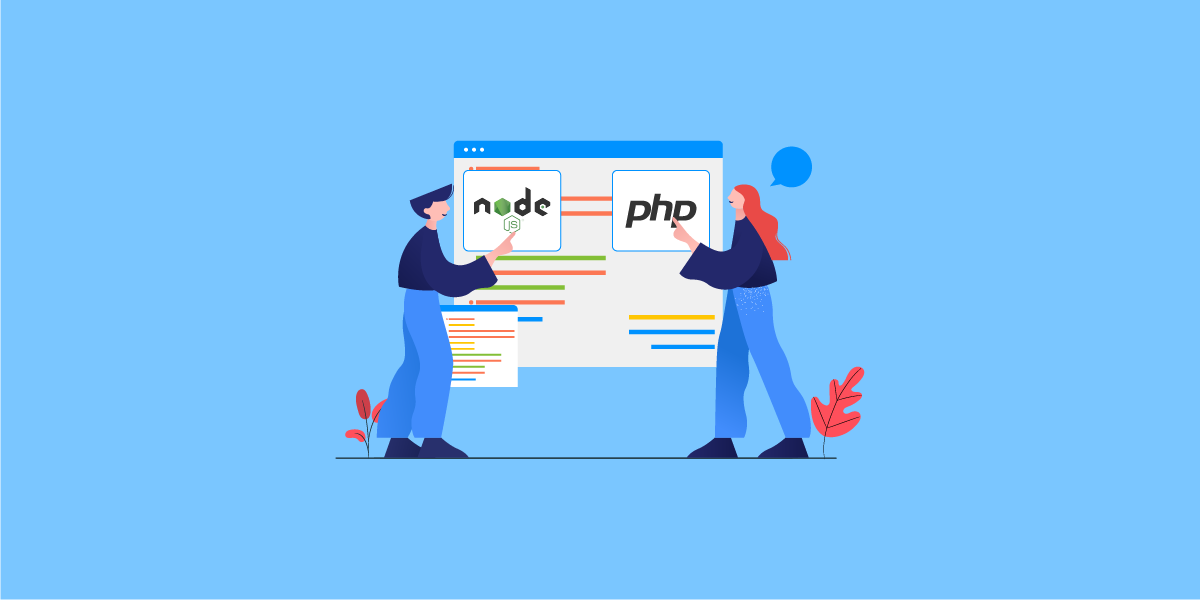 So the final answer on what to choose between PHP vs NodeJS lies in understanding the features your web project requires.

With its performance and ease of development advantages, it’s best to use NodeJS to build:

On the other hand, PHP is ideal for:

There is no standardized process to identify if NodeJS is better than PHP or vice versa. However, instead of trying to evaluate which technology outshines the other, it’d serve you well to the first map out the requirements of your project and then select the technology that best fits it.

In addition to technology relevance, also pay special attention to the human expertise you possess. If your team is more proficient at one technology over the other, it’s advisable to inquire if the expertise can compensate for the potential drawbacks of the technology.